The LumendDim6 is a highest power CRMX Lumenradio based device, delivering up to 42A across 6 dimmer channels — 500W at 12V, 1000W at 24V. Perfect for wireless lighting on turntables and set pieces of any size. Provides all RC4 Series 3 features with the power to go big.

It smoothly dims (RGBA/WW/CW) LEDs and lamps, controls small DC motors with wide-range speed control, and provides many features to optimize color and appearance for a variety of theatre and motion-picture applications.

Each LumenDim4 purchase comes with one 2dBi antenna and one set of Anderson Connectors.

The LumenDim6 also features dimmer curve tweaking to find the most visually linear and pleasing response with any LED technology being used.

The RC4 LumenDim6 provides two versatile dimmer outputs.  Like all RC4Magic devices, it includes a built-in radio receiver and uses RC4 OneTouch™ for easy assignment of any DMX channel and dimmer curve to any dimmer with a single press of a single button.

In addition, RC4 ColorMatch™ on dimmers makes it easy to calibrate the color rendering between two light sources.

The LumenDim6, and all RC4 Series 3 dimmers, provide a wired DMX data port.  In most cases this port is used to output data to nearby fixtures including fog machines, moving lights, and projector dousers.  The DMX port can also be configured as a DMX input, allowing the LumenDim6 to be used as a wired dimmer.  In this mode, a comprehensive RDM implementation includes E1.37 dimmer configuration parameters, numerous status sensors (voltage, temperature, current), and each individual dimmer appears as an RDM sub-device.

Anderson Powerpole connections are provided for connection of the power supply (DC IN) and load devices (DimA to DimF). The supply powers both the internal electronics and the connected loads. Dimmers switch on the negative side of the circuit, ideal for common-anode (common positive) LED tape.  Dimmer output voltage is precisely the DC power input voltage with no appreciable losses within the 42 Amps total power handling limit of the device.

Page load link
Due to massively increased prices of electronic components, we unfortunately have to increase the prices for RC4 dimmers by 90 €/piece – for a limited period of time. This surcharge will probably cease to apply from February 2023.
1
1
Your cart 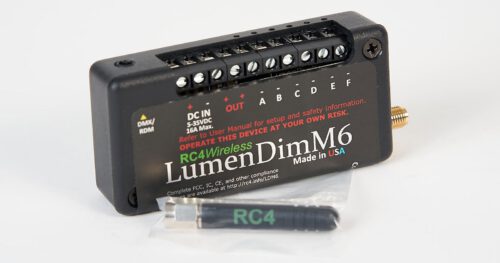