RC4 OneTouch™ makes it easy to assign any DMX channel, dimmer curve and digital persistance with a single short press of a button.

The first received DMX channel (>0% level) and its according level define the dimmer curve, digital persistance and DMX Channel. > push SET A to program- that´s it.

Now all four channels are set-up. See all Set-up short press options below.

RC4 Series 3 dimmers are equipped with multiple curves for lamps and LEDs, as well as inverted curves, curves for servo motor control (great for puppetry), and a curve for AC wave generation (ring a telephone!). There are curves with beautiful smoothing for LEDs, and curves for super fast strobing. You can even choose to control RC4 dimmer outputs with either 8-bit or 16-bit resolution, just by choosing the right curve. 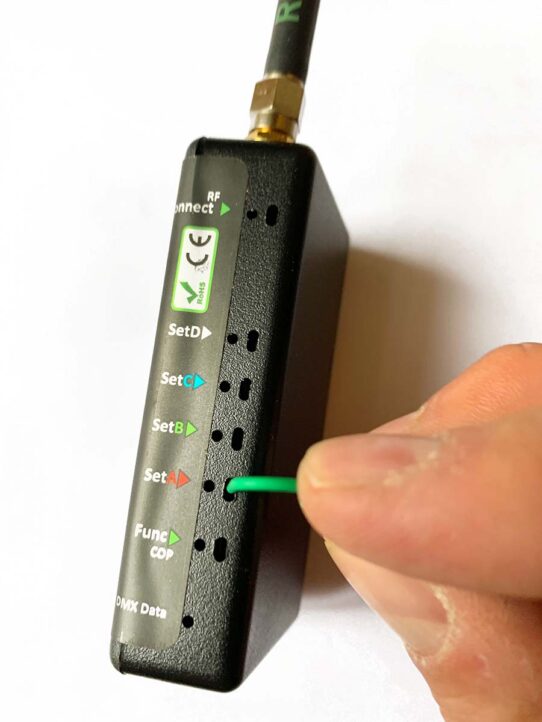 In addition to the configuration with a short press of a button, there is also the “Long Press” OneTouch configuration.

This configuration with a longer pressed button on the dimmer enables additionally individual settings.

For “Long Press”, a button on the dimmer must be pressed for at least 5 seconds.

For privacy reasons YouTube needs your permission to be loaded. For more details, please see our Data Security Statement.
I Accept

Today, simple RC4 OneTouch™ makes it easy to assign any of 512 DMX channels with any RC4 dimmer curve to any RC4 dimmer with a single press of a button.

No matter how small RC4 wireless dimmers become, OneTouch™ will always provide a small and simple way to configure our devices without additional equipment or software.

When the objective of a device is to be as small and inconspicuous as possible – to be invisible – the biggest challenge is creation of the user interface. Way back in 1993, RC4 Wireless recognized that wireless dimmers would get smaller and smaller, and a method of setting channels and curves needed to be scalable down to the tiniest sizes.

Our OneTouch™ system first appeared on RC3 dimmers in the 1990s (the predecessor of RC4), when the limitations of wireless technology could deliver only 32 channels, and curves were limited to Linear and Non-Dim. Inverse-square-law (ISL) for LED dimming followed shortly after (and still in the 90s!).